Beyond Pride Month, it is important to support and recognize our LGBTQ+ young adults; what better way than with great book recommendations? 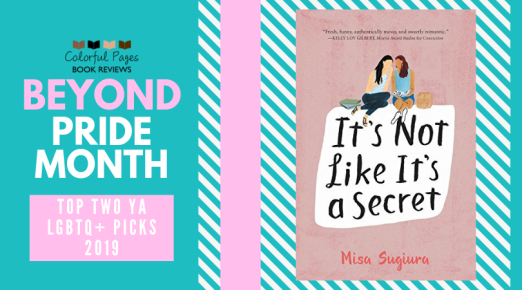 It’s Not Like It’s a Secret, by Misa Sugiura

From award-winning author Misa Sugiura, “It’s Not Like It’s a Secret” follows sixteen-year-old Japanese-American Sana Kiyohara as she moves across the country to restart her life as the new kid. This novel not only follows Sana as she struggles to accept her sexuality, but also follows her through challenging both racism and homophobia at home, within her friend groups, and also the prejudices she finds in herself.

“It’s Not Like It’s a Secret” falls into both the Conversation and Exploration categories found on the Spectrum of Multicultural Literature. At the beginning of the novel, Sana is the only Asian-American student in her small Midwest high school awash with Caucasian students. After moving to California, she not only falls into an easy friendship with other Asian-American students but also struggles to find common ground with the Latinx group her crush, Jamie, belongs to. Through these friendships, she discovers how it feels to belong but also challenges her own misconceptions about different cultures.

“It’s Not Like It’s a Secret” is a winner of the Asian/Pacific American Award for Young Adult Literature and is recommended for grades 9 and up.

If You Could be Mine, by Sara Farizan

Based in Iran, “If You Could be Mine” follows seventeen-year-old Sahar and her best friend, Nasrin as they navigate their romantic relationship in a country where homosexuality is illegal and punishable by imprisonment, public beatings, or even execution. This novel dives deep into the political implications of simply being with who you love. In this coming-of-age novel, both Sahar and Nasrin struggle with the adult decisions they have to make; should they marry without love in order to protect themselves or embrace who they are and take on the world together?

This novel is categorized as both an Exploration and Representation Book as it shines light on all of those across the world who do not enjoy the freedom to love who they love regardless of gender, as well as explores Iranian culture in depth. This Pride Month, it is important to remember and recognize the millions across the world who live in secret, such as Sahar and Nasrin. “If You Could Be Mine” is a winner of the Lambda Literary Award for LGBT Children’s/Young Adult and is recommended for grades 9 and up.

Born and raised in Seattle, Washington, I am a current undergraduate student at Arizona State University. When not studying, I can always be found at the local Starbucks with a book in my hands. View all posts by Lauren Holly